It is too early to say whether families will be allowed to gather over Christmas, a Cabinet minister warned, despite hopes that social distancing rules will be relaxed over the festive period.

Boris Johnson wants to ease coronavirus rules to allow families to be reunited and his Government has been working with counterparts in Scotland, Wales and Northern Ireland to agree to a UK-wide approach.

But following reports that households would be allowed to mix indoors for a five-day period starting on Christmas Eve, Business Secretary Alok Sharma said it was not yet clear whether that would be possible.

“I just think it’s too early to be reaching any conclusions on that. What none of us knows right now is what the infection rate is going to be in different parts of the country.”

England’s national lockdown measures expire on December 2 and are expected to be replaced by a return of regional tiers.

The Sun reported that the Sage scientific advisory panel has been modelling the impact of meetings between groups bigger than six.

With Christmas Eve falling on a Thursday and a Bank Holiday on Monday December 28, ministers are looking at that five-day period to allow indoor gatherings.

But households that choose to link up are unlikely to be able to mix with others outside that grouping during the celebrations.

Medics have warned that the tiered system which was in place before the national lockdown was inadequate in tackling the virus.

Tougher measures than the previous tiers could be put in place when the lockdown lifts on December 2, the Daily Telegraph reported, with default restrictions likely to include a ban on mixing with other households.

This could then help drive down the infection rate to allow an easing over Christmas. 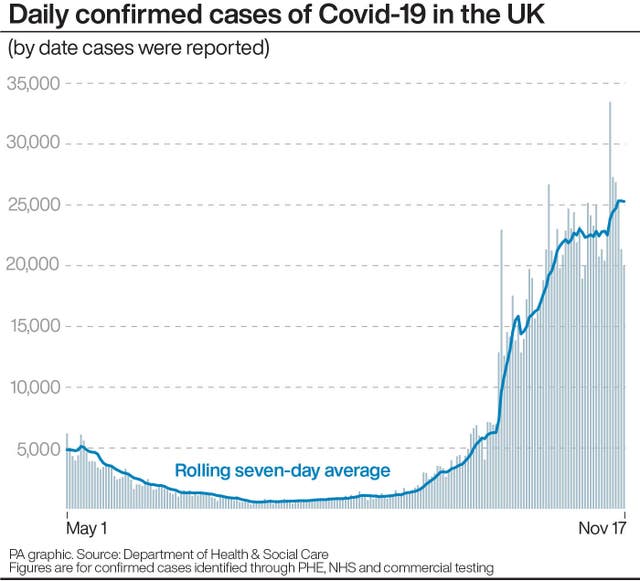 Downing Street has not confirmed any of the measures under consideration.

But the Prime Minister’s official spokesman said: “We are looking at ways to ensure that people can spend time with close family over Christmas at the end of what has been an incredibly difficult year.”

The British Medical Association has called for a beefed-up tier system when England’s lockdown ends.

It said the previous system was “inconsistent” and did not contain the spread of the virus, echoing a Government adviser who warned the tiers needed “strengthening”.

The BMA’s blueprint for leaving lockdown including “triggers” under which areas would move up and down the tiers.

The blueprint suggests non-essential travel between tiers should be “restricted”, and “more robust” quarantine procedures should be put into place.

Social mixing should be encouraged to take place outdoors and there should be a two-metre distance between tables in pubs and restaurants, according to the proposals.

The BMA plan also suggests the rule of six be replaced with a “rule of two households”.

Official figures showed a further 598 people had died within 28 days of testing positive for Covid-19 as of Tuesday, bringing the UK total to 52,745.

– The Prime Minister is due to answer questions at PMQs by videolink on Wednesday as he continues to self-isolate after a meeting with MP Lee Anderson, who tested positive for Covid-19.

– NHS Test and Trace chief Baroness Harding is self-isolating after being told to do so by the app she oversees.

– People are being encouraged to improve ventilation in their homes by opening windows as part of a new Government winter coronavirus campaign.

The BMA added that before ending lockdown the Government should ensure that the Test and Trace programme is fit for purpose.

“We must not squander the efforts of the many people who have followed the law, stayed at home, sacrificed freedoms and incurred financial loss in order to contain the virus,” said BMA chairman of council Dr Chaand Nagpaul.

“When the first lockdown ended, there was no coherent plan for keeping Covid-19 at bay, no clear and simple public messaging; this was followed by spiralling infection rates, more businesses failing, new local lockdowns, and now we have a death toll at more than 52,000.

“As England prepares to exit its second lockdown, it is unthinkable that we make the same mistakes again because this time, the impact will be far worse. It’s reasonable to conclude that without these measures, the NHS will not be able to cope with caring for even the most critically ill patients.

“This report demonstrates a sustainable plan for reducing the level of infections from Covid-19 until a vaccine programme is under way.”

Next summer will be a ‘different world’ for weddings, says Boris Johnson

George Ford will not underestimate a fearless France side